Sneja had a really nice and simple idea about shredding images (and video). I like this thought a lot because it visualises the action of the destruction of the files in a nice way. I have tried to sketch of what it could look like. It would be great if every new file uploaded just somehow mixed into the previously uploaded file and eventually got pushed away so the image on the screen kept changing for each uploaded file. 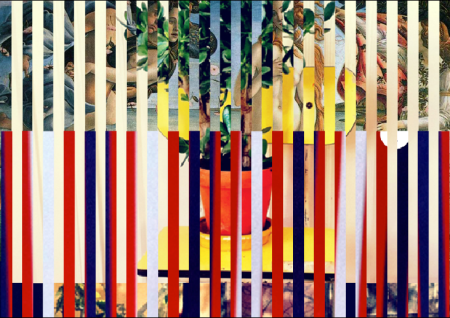 Here is a really simple visualisation of how I imagine the flower project could look. We should somehow filter the contributions into RGB. One way could be: Image = R, Sound = G, Movement = B, All = RGB.

The website should have a chart saying how much of each type of light the plant was receiving. The biggest problem with this idea is that you don’t really see any effect of the light right away. But since different light effect the plant in different ways there could be some development over time.

Sustainability in art has always been an issue, even before the digital era. There are numerous cases of ancient art and artefacts which were destroyed either during their times or centuries later – some even deliberately. And till now, the search continues for some missing works of art.

One would think advancement in technology and from past experience, we would have learnt  to better preserve and pass on today’s art, but this is not always the case. That’s why it’s especially commendable the efforts which Ben Kacyra and his team have put into sustaining art from all over the world. http://www.ted.com/talks/ben_kacyra_ancient_wonders_captured_in_3d.html

Everything created can be destroyed. But sometimes, even in that ‘un-creation’, a new creation is made. Case in point is the way some guys decided to creatively re-create their 404 pages. A page for work that had either been deleted, moved, or for some reason or the other could not be found, is turned into a creative platform for the brand to express themselves.

Let’s un-create and re-create by breaking codes. We’ll be taking a jpeg image, breaking the codes which come together to form that image,  then re-arranging those codes to form a new image. A file with all the codes that come together to form that image will be sent out and everyone contributes in shuffling the arrangement of the codes like a pack of cards. Randomly changing the position of any code would affect something in the image. Moving all the codes about would change the placement of every single element in the jpeg. After everything has been processed, the final output is the same jpeg, but a totally different image.

Thus everyone has a part to play in un-creating and creating because for every code you move, you change the original image and for everyplace you drop the code, you create a new image.

A quick tutorial from CA on how to:

The sketch shows two diagrams each visualising the data being destroyed. Both root from the same source – a webpage which allows multiple-users to upload any file format. These files are either broken down into a ‘wave-form’ of binary which is used as the source from which the visualisation is taken, or else simply the size and date (or other easily accessible data) is taken from the file to inform the visualisation process.

The two routes visualise the data in different but related ways – both use bubbles which can be said to represent the cloud. This cloud like aspect can be increased or reduced depending on what is finally decided to be important.

The real-world example shows an arduino receiving data from the webpage – this data controls the flow of gas (helium?) and liquid (some bubble-making liquid) through a motorised valve-head. Basically the larger the files the larger the bubbles made. Once the bubble has been made the data is removed from the database, and from that second on only remains as an entity until the bubble bursts.

The online example shows a similar idea but is represented through coding. People can view the webpage so see what files are currently being uploaded / bursting. Perhaps some ghost of the orginal file could remain for people to interact with while the bubble still exists – e.g. on mouseover a faint image of the original source file could be seen within the bubble. Perhaps some bubbles could merge to form mega-bubbles that exists for brief moments before bursting.